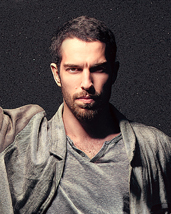 Eos Karlsson is a professional actor, stuntman and danceacrobat, based in Stockholm. He is renowned for his stunt performing accomplishments around the world and is also a filmmaker and graphic designer. Karlsson has been working on feature films (Columbia pictures, MGM), video games (Warner Bros.), short films (Nickelodeon, SVT), commercials (Ikea, Volvo), music videos (Universal, Sony), stage productions (Seoul International Dance Competition), live action shows and other events and galas (MTV, The Nobel Banquet). Karlsson also run the trio group The Royal Playground with Jonathan Morell and Lucas Carlsson. They have been performing for stage and film together since 2006 with a mix of circus, dance, theatre, stunts and comedy. Right now they are working to write and produce a broadcast comedy series for Swedish television. Karlsson’s training in the business includes certification from three schools in acting, acrobatics, stunt performing, improvisation and dancing, alongside a Bachelor’s Degree from Sweden’s renowned University of Dance and Circus, operated by the nation’s Ministry of Education.

Karlsson rarely sits still, so don’t forget to check out www.eoskarlsson.com / www.fb.com/eoskarlsson if you want to keep up with his latest adventures.