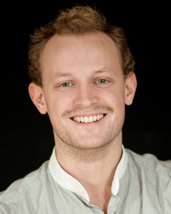 Janus Elsig is an actor and musician, born in 1982 in Denmark. He trained as a classical actor at The National Theatre School of Denmark in 2011 and made his professional debut straight out of acting school in the box office hit movie This Life (Hvidstengruppen, 2012). Since his graduation in 2011, he has starred in two to three different plays a year, on several different stages throughout Denmark, including Copenhagen Music Theatre, Folketeatret, Aarhus Theatre, Nordkraft, TEAM Teatret, Zangenbergs Teater, Svalegangen and more. Janus is also both a singer and a musician, playing saxophone, guitar, keys and samples. He has, since 2007, released three albums with Denmark based band, Men Among Animals, through the German record label Tapete Records.

He has also directed his own pieces of theatre, and his productions are characterised by existentialism and dark humour, adding live music and video projections to make intimate poetic spaces. His productions include the monologue Company (co-director Walter Asmus, 2011), based on a novel by Samuel Beckett, and Thoughts About Death (2013) which was performed at CPH STAGE ‘13. With two sports professors as parents, Janus has always been very physical in all kinds of sports. He has been training in capoeira in Spain, London and Copenhagen, and he has a past in musical theatre, receiving dance training as a member of a boy band in Spain. He also greatly enjoys snowboarding, surfing and skateboarding.