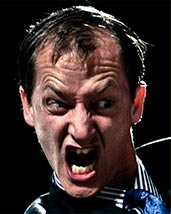 Educated actor from the Acting School at Aarhus Theater, 2003.

He has starred in many different performances around Denmark at venues like The Royal Danish Theater, Aarhus Theater, Nørrebro Theater, Østre Gasværk, Copenhagen Music Theater, Husets Teater, Theater Grob, Republique Theater, among others.

In 2005/2006 he also starred at the famous venue Volksbühne in Berlin in the performance ”Medea in der Stadt”. He performed in german, and he is fluent in both german and english.

He starred in 7 different movies and a lot of short movies and the DR productions ”The Killing 2”,  ”Krøniken” and ”Broen”.

He is one of the often used voices in DR when it comes to radio theater/radio drama.

Besides that, he is teaching drama, and is soon finishing a  university degree in Arts and Cultural management.