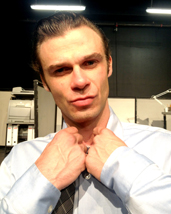 Kasper Ravnhøj was educated at Centre for performing arts 1995-1998 in Copenhagen. He became artistic director for Mute Comp. Physical Theatre, which he founded in 1999. Mute Comp. tackles urban themes and tendencies in performances that embrace theatre, contemporary dance, live music, slam poetry, slapstick and crash dance; often combined with a lot of physical risk taking with a sense of playfulness and creating a unique but highly accessible stage language. His work constantly challenges the body and works on the edge of the possible, often putting performers at physical risk. The company has wowed audiences with their subtle and figurative performances through a fresh and accessible dance style that embraces all genres and moods – from slapstick comedy to dark melancholy. Mute Comp. Physical Theatre has already won a number of prizes and is at the forefront of the Danish dance theatre scene. He was named male dancer of the year in the German dance magazine Yearbook of Tanz Magazine 2011, and was nominated as dancer of the year at the Danish Royal Theatre in 2013.