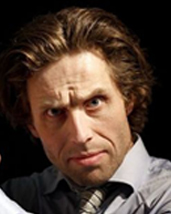 Kristján Ingimarsson is  an artist based in the field of visual theatre.  His physical language is in constant development in a blend of mime, slapstick, acrobatics, clowning, dance and theatre. Stylistically, his theatre is characterized by high-energy, rhythmic sequences, surreal effects and comic as well as touching moments.

Ingimarsson's performances typically take their starting point in twisted thought experiments about modern civilization in which a thesis is developed in flights of fancy into extremely funny insanity. Every performance is a new experiment, and a result of a close collaboration between artists from different disciplines as architecture, the visual arts, music, films, dance and digital media.

Kristján Ingimarsson (b. 1968). Originally from Iceland. Moved to Denmark in 1992. Founder and artistic director of the Neander theatre company (1998), as well as freelance director, actor and performer.

Neander is an award winning, and critically acclaimed, world-touring physical theatre company. Characteristic of Neander's productions is their almost limitless physical expression along with endless curiosity.