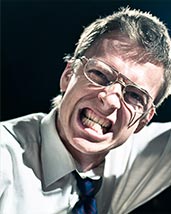 Lars Gregersen has through his 18 year journey through the world of stage art examined as many techniques and tools as possible, and has focused on mixing circus, dance, theatre and music.

Since 1997, he has performed in Denmark and abroad in many performances and with many companies, of which he has also started several.

In 2002 he created the company “teatro GLIMT” (now called GLiMT) together with Camila Sarrazin, and the company have since created 12 smaller and bigger performances and toured intensely both in Denmark and abroad.

He has either performed in, produced or directed the companys productions, as well as working with other productions as performer or circus choreographer.

In 2006 he created the company “Royal Bones” together with 8 other performers and musicians, focusing on experimenting with the symbiosis of music and performance.

In the autumn of 2008 he premiered his first solo-performance “Sisyphus Ascending” which received great reviews and receival from the audience.

In the summer of 2009, he directed his first full length performance, the sitespecific cabaret ”Alone Together”, in the architectonic masterpiece “Tietgenkollegiet” in Copenhagen under the festival of urban stageart “Metropolis”.

In 2012 he directed and premiered his new solo-performance “Are you us?” to great audience and critical acclaim.

Since 1998 he has taught in several circus and theatre schools, and extensively at the Danish circus school in Copenhagen.